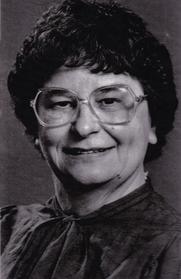 By NANCY TOMPKINS and LINDA LAIRD
The Capital-Journal

Stannie Anderson was a talented news reporter who looked life's challenges in the eye and didn't let them stop her.

Anderson, 73, whose career at The Topeka Capital-Journal spanned 33 years, died Wednesday at her home in Burke, Va., after a six-month illness.

The 4-foot-11-inch reporter and mother of two small boys joined the Topeka newspaper staff in 1958.

While working hard to keep readers informed of medical news in Topeka and establishing herself as an award-winning medical/health journalist, she faced and overcame tough challenges in her private life.

They included becoming the sole support and parent to two small sons at a time when most women felt secure as stay-at-home mothers; working and raising her sons in Kansas, far from her West Virginia roots and family; later losing a son in his 18th year and miraculously winning a battle with breast cancer.

This intelligent, little woman with spunk rode the city bus or took a cab to the sites of breaking news.  She didn’t tackle learning to drive a car until she was 44.

She had tenacity and optimism and they kept her going.

As the paper's medical reporter, Anderson covered Topeka hospitals and a wide spectrum of health news. She also attended medical conferences, asking questions of surgeons and specialists of national and international acclaim.

But her favorite part of the job was covering advancements in mental health and psychiatry and other fascinating subjects being explored at Menninger.

Her persistence and professionalism won her a solid working relationship with Dr. Karl Menninger, who became a valued friend.

"Dr. Karl was not an easy person to deal with," said Dr. Roy Menninger, a nephew and chairman of trustees at Menninger. "But Stannie was a gracious and elegant person who had a style that was almost ironic for a hard-nosed reporter."

Menninger said Anderson was a delight to talk with and that her interest in the health field was unquenchable.

"She was eager to find an effective way to convey to the outside world all that was necessary for the public to understand what was happening in the health field," he said.

"Before Stannie wrote about it, biofeedback and autogenic training was considered just a physiological curiosity," Green said. "She was a consummate reporter and a true skeptic, who had to test everything herself and wanted to interview everyone involved. And she did."

Anderson, who experienced blinding and incapacitating migraines herself, became a test participant and learned to use biofeedback.

She gained access to the wards at Topeka State Hospital and did stories on patient treatment, labor and employment issues, and medical advancements in the treatment of mental illness.  She also made the rounds and reported on Kansas Neurological Institute and Topeka’s VA hospital, as well as three other hospitals in town.

Anderson, adept at taking notes in Gregg shorthand, also covered other types of stories during her career and interviewed celebrities ranging from Buster Keaton to Ann Landers, and Indian Swamis who came to Menninger as a subject of study.

She also covered the Topeka Zoo during its vast improvements and rise to fame led by former zoo director Gary Clarke.

Clarke observed that she was a top-notch journalist, who wrote objectively yet allowed readers to feel the emotion of those in her stories.

"She recognized the value of the zoo to the community," Clarke said. "What she wrote wasn't 'just a story.'"

And all this from a woman who rode the city bus or took a cab to the sites of breaking news because she didn’t tackle learning to drive a car until 1971 at age 44.

After the June 8, 1966, tornado wrenched its way across Topeka, Anderson walked in the dark through debris from her home in the 1600 block of Fillmore to Stormont-Vail Hospital to cover the storm situation at the hospitals.

Back in the newsroom, a pint-sized person often passed by in a blur.

It was Stannie, always in a hurry to meet a deadline, always in motion, pushed by a purpose, whenever she left her desk.

Her longtime co-worker, former Capital-Journal city editor Don Marker, noted she was so short that "sometimes you could hardly see her for the tall stack of stuff on her desk."

"She was a good person and a kind, compassionate woman," Marker said, recalling her ongoing series of stories that sought adoptions for hard-to-place children.

"She took more satisfaction from that than any other thing she was involved in," he said. "As a result of her stories, a lot of kids were placed that otherwise wouldn't have been."

She received a plaque from the U.S. Department of Health and Human Services in 1983 for this series, which also earned for the newspaper the Stauffer Communications Founder’s Cup Award in 1983 for outstanding community service.

Anderson survived breast cancer at age 43 in 1969, stunning her doctor, who believed her disease to be terminal after finding it had spread through four lymph nodes. She had radiation treatments.

Later her cancer slowly began to disappear and continued to recede until it was gone.  Her doctor had no explanation.  And the cancer never returned.

Years later, someone asked what she attributed her survival to.

"Attitude," she replied. "Determination.  I had to live. I had no one to raise my sons.  I had no choice. I had to survive."

Anderson, the youngest of five children, lost her mother at the age of 18.  Her oldest son, Bill, died at age 18, while working under a car that fell from a jack that supported it.

Her sister died of breast cancer in 1978.

Late in life, Anderson shared her philosophy for dealing with an insurmountable problem or dire situation:

"If they tell you there is something you can do to help your situation, then do exactly what they tell you, and say prayers, and then don't worry.

"If they tell you there is nothing you can do, then say prayers for what you need, and trust God, and then don't worry.

"Refuse to worry. Worry doesn’t help anything, and it isn’t healthy to worry."

A plaque above her home computer read: Expect a Miracle.

Anderson became city editor of The Topeka State Journal in 1977, but

publication of the afternoon newspaper ended the next year.  She was

then named assistant city editor of The Capital-Journal.

Upon her retirement in 1991, management invited her to serve as the newsroom writing coach, critiquing locally written stories and columns in each day’s newspaper, praising noteworthy writing and reporting, and also pinpointing errors.

“She did a great job of it,” said Topeka columnist Dick Snider.  “No matter how good you thought you were, she would find errors. She nailed everybody.”

She was proud to be the newsroom writing coach for eight years.  Her “Gleenings” has been missed since she moved in December 1998 to Burke, Va., to live near her son. She had heart surgery last July.

A journalism scholarship fund in her name has been established at the University of Kansas, in accordance with her wishes.  It is set up to help a female student who is a mother and wants to pursue a degree in journalism and needs financial help.

Anderson is leaving a legacy to help another mother and potential journalist pursue her dream.