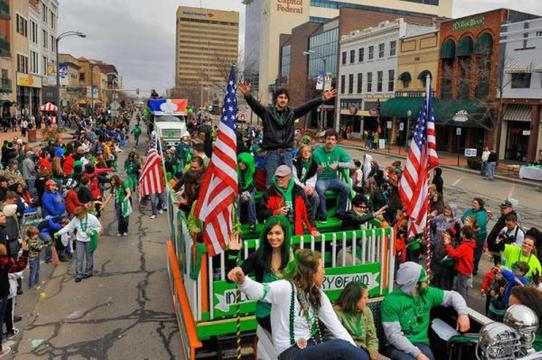 Luck of the Irish eludes reporter on assignment---


I don’t know exactly what it was, but it wasn’t the luck of the Irish Saturday.  At least not for me.

“Take a $10 bill and go over to the Next-to-New Sale, pick up some bargains, and do a story about it,” the editor suggested late Friday.

I not only did that, but inadvertently I also covered the tail end of the St. Patrick’s Day parade on Kansas Avenue.

Finally I drove toward Kansas Avenue on E. 8th and spotted a motorist backing out of a stall on the Avenue.  Triumphantly I drove into it and headed for the auditorium a block away.

There were hordes of people everywhere I looked.  I had deliberately waited to arrive at 10 a.m., figuring the crowd might have slackened a bit.  No such luck.

There were really some bargains there.  First I found a nice butcher knife for 10 cents.  I put that in my bag.

Next there were some electric hot dog cookers.  I pondered whether to buy the one that heated one hot dog and a bun, or the one that cooked six hot dogs all at once.  That one wasn’t too difficult.  I might have a luncheon for six people some day.  I put the six-dogger in my bag.  That cost me $1.50.

Next I found a potholder that is just perfect for the color scheme in my kitchen.  Mark down another 10 cents.

Next I found a portable hair dryer in a neat plastic case ($1.80). And a rose-and-white sewing chest—just the one I’d been searching for.  That cost me a rousing $2—but well worth the price.

By this time I had spent $6.80, which meant I had $3.20 left to squander on clothes on sale on the main level of the auditorium.

So I paid for my lower-level bargains and headed upstairs.  Then I had to go outside and come back in through another door where I was told I would have to check my parcels.

Then came my downfall—on the clothes floor.  Everywhere I looked there were rows and rows of pants, sweaters, blouses, T-shirts, and dresses, all on hangers.  And the prices!

I joined the packs of bargain-hungry customers.  It was easy.  Before I knew it, I had picked out one blouse, four T-shirts and three pairs of pants.  Oops! That adds up to $4.  (Sorry, Boss.  How can I possibly give one of them up? Anyway, I’m spending my own money.)

Next, I spotted an elegant pantsuit for only $2. Into the bag.

Then I passed by a long table covered with purses.  One was a beautiful, genuine leather purse for only 50 cents.  I’d have to be crazy to pass up a bargain like that.

I wrote out my second check, this time for $12.  Even the Junior League checkout girl said admiringly, “That coat is neat!”

I left just before the place emptied to make ready for a half-price sale.  I thought longingly about it, but figure I’d have to borrow my neighbor’s truck to get any more bargains home.

So at last I made a deal with the sale worker.  I would take two of the parcels to my car, drive back to the auditorium, park about a half-minute while I ran up to the front door to get my other two parcels.

I was on my way toward Kansas Avenue when I realized that a small amount of Irish blood in me hadn’t kept me lucky.  I’d forgotten the St. Patrick’s Day Parade.  The parking place I had found on Kansas Avenue suddenly didn’t seem quite so convenient.

There were thousands of people thronging the Avenue, wearing green clothes, green hats, waving green balloons and having a thoroughly Irish good time and a goodly percentage of the were leaning on my parked car.

I squeezed my way across the street to my car and put my two parcels inside.  But no way was I going to get my car out of there without flattening 10 or 12 Irishmen waiting for the parade.

And that is how I happened to cover the tail end of the St. Patrick’s Day parade as well as the Next-to-New Sale.

And what a tail end of a parade!  There was a green tractor, a green Bookmobile, Huffn’Puff trucks that hissed and shot huge flames into the air, people tossing candy to kids in the crowd, horse-drawn buggies, and old fashioned police car, pretty girls in bright green dresses, and I swear I’m reporting accurately when I say that some of the paradewatchers told me they saw a dog with a green shamrock painted on its back.

Next year, I think it would be a good idea to send some other reporter to the Next-to-New Sale with a $10 bill.  I just can’t seem to miss a parade, and I’m susceptible to mink!