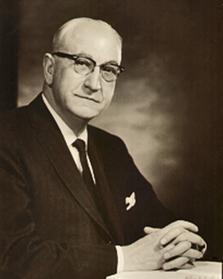 Undoubtedly hundreds of them carry with them the memory of sitting beside his desk while he talked and peeled a bright red apple, the curl of peel growing longer and longer.  The visitor would always be sure the chain would break, but it never seemed to do so.

Once the apple was peeled, he would cut out the core, then carefully cut the apple into four pieces—two for the visitor and two for himself—all the while continuing the conversation.

Dr. Karl nourished people emotionally as well.  He listened to them intently.  People learned very quickly that he was not a small talker about things like the weather.  So they brought to him the brightest and darkest stories of their lives.

He never told these stories to other people.  They remained in small compartments in his life, separate and private.

That is why it is common to hear people say, “Dr. Karl and I have something special.” Some stories emerged—but never from Dr. Karl.

Menninger personnel still remember a young psychiatric resident dying of cancer.  Dr. Karl visited him almost daily to read to him from the Bible. Prisoners at Shawnee County Jail told of how Dr. Karl had Christmas dinner with them for many years.

One woman, whose young son had been killed in an accident, recalled returning to her home on a wet, dismal October day a few days after the funeral.

“And there, pacing back and forth on my front porch, ringing the doorbell and occasionally peering into a window, was Dr. Karl,” she said softly.  “I wasn’t anybody

important. But he was there.  He didn’t say much. Just listened. I remember most of all his eyes, just melting with empathy.”

History will record Dr. Karl as a giant of psychiatry.  But mental patients and their families will remember him as the one who lit a candle of hope.

Despite the intellectual stimulation in Boston for a brilliant young doctor, Dr. Karl came home to Topeka.  He set up practice with his father, Dr. Charles F. Menninger, and later was joined by his brother, Dr. William C. Menninger.

In the early days it was the gentle and cultivated Dr. C.F. who kept the partnership going.  He was a popular Topeka physician and had delivered many babies.  But he went along with his eldest son, who wanted to specialize in treatment of mental illness.  He hoped his boys would help him form a clinic, like the Mayo Clinic.  A third son, Edwin, became a newspaperman and authority on flowering trees.

Dr. Karl had returned to a place that always would be dear to him.

He once recalled incidents in his early day practice.

He had hired a woman who lived near downtown Kansas Avenue to look after some patients.  One, a handsome 6-foot-5-inch football player, was staying with her.  One day this man just walked out the door wearing only pajama bottoms, with bare feet and no shirt.  The woman telephoned Dr. Karl, who raced to Kansas Avenue.

I started to gallop after him,” Dr. Karl remembered.  “Now he could have made mincemeat out of me if he wanted to, but I used all my medical authority and ordered him to stop.  He wasn’t trying to escape me especially; he was just trotting along like a lost puppy dog.

“I remember being so breathless that I couldn’t call very well.  I caught up with him and tried to stand in front of him, and he just made the run around me.  Nobody seemed to get very excited.  It’s a lovely town, Topeka is.  We jogged back to 8th and Kansas Avenue and down East 8th, and I finally caught up with him.

Another of his early patients was a carnival hypnotist.

Always fascinated by unusual things, Dr. Karl asked, “How do you do that?”

The patient pulled out a glass ball on a string and waved it back and forth in front of Dr. Karl and had him hypnotized within minutes.

“Both of us were a little embarrassed,” Dr. Karl recalled later.

In a now-famous radio talk, “My Town,” on NBC in 1953, Dr. Karl talked about Topeka.  He recalled how, as a boy, he and his brother Will and some other boys would go by the old insane asylum (Topeka State Hospital) to gather walnuts on the grounds “or just peeking at the wild men.”

“We had seen the great stone castles with the barred windows.  Occasionally, we actually saw some of the ‘crazy people,’ marching along in groups with guards beside them who motioned us to stay back.  It was scary. But quite a sight.”

He told his listeners: “…it is not only the sick people who are benefitted when a town gets interested in psychiatric illness.  There is something about work with sick minds and hearts that makes ordinary people more sensitive to suffering, more tolerant, more human—even to each other.  They discover that love cures people, the ones who receive love and the ones who can give it, too… (Topeka) has changed in half a century—so have I.  Psychiatry has changed Topeka, and perhaps Topeka has helped to change psychiatry.”

His first marriage was to Grace Gaines, with whom he had three children, Julia, Robert and Martha.  He called his first wife “a noble woman.”  His second marriage was to Jeanetta Lyle, his “partner” of 48 years.  They had an adopted daughter, Rosemary.

Much has been written in recent years about the explosive oral fight between the two Menninger brothers, Drs. Karl and Will.  The conflict was far too complex to explain in a simplistic fashion.  There was a great difference in their personalities.  Dr. Will loved stability; Dr. Karl loved change. Yet there was no split between the brothers when it came to their basic caring about the mentally ill.

To a Menninger watcher, there seemed to be a lot of different Dr. Karls.

There was Dr. Karl the advocate, who never gave up.  Some of his causes were more than a half-century old, but he was still working on them near the time of his death.  He was an admirer of the American Indians and was their advocate.

He fought for understanding and help for mistreated and abandoned children and for prisoners.  He was an unrelenting conservationist who loved the beauty of nature and deplored needless killing of coyotes, whales, and alligators (he didn’t even want to speak to people who wore alligator shoes).

There was also Dr. Karl the inconsistent.  He didn’t love all nature—just beautiful nature.  He hated mosquitoes and killed all he could.  He was in favor of rat extermination.  But, then, consistency wasn’t something that Dr. Karl considered a virtue.

He was an accomplished pianist, a painter, a poet and a superb writer who disdained the jargon of medicine.  He was a Bible scholar and former Sunday school teacher, who found no conflict between science and his religion.

Dr. Karl couldn’t read people’s minds, although he said that some people thought he could.

When provoked—and sometimes even when not provoked—he could be devastatingly blunt to anyone who wasn’t a patient or a troubled person.  (Patients and troubled people were different from the rest of us, to Dr. Karl.)

He could be disarmingly unassuming.  A new member of his church recalled that he walked up to her and said, “I’m Dr. Karl Menninger, a local physician.”

He could create havoc with a seemingly innocent question, “Why are you gesturing so much?” –and then sit back and watch with clinical interest as the gesturing of his visitor increased.  He gave his frustrated visitor he feeling of being a butterfly pinned on a card.

He could be unforgiving—particularly if you were disloyal, if you were a doctor and mistreated your patient, if you told a lie, wasted time, sawed a limb off his favorite tree, chewed gum or took his parking place.

Dr. Karl believed that prevention was the answer to many of the world’s ills—and he spent many of his later years working with the Villages, which provides homes for abused and neglected children.

The Villages children always have made a great event of Dr. Karl’s birthdays.  A few years ago, however, the children were upset and grieving.  One of the children, a little girl named Starlet, had drowned accidentally a few days before the birthday event.  Dr. Karl seemed to be watching the children carefully, noticing the downcast faces, the troubled eyes.  He also seemed to be casting around for a way to let them know he understood and cared.

Finally, one little boy walked up to him and asked, “Dr. Karl, if you could have any gift in the world for your birthday, what would you choose?”

The room grew silent.  What would he want? Something grand, no doubt, such as world peace, an unpolluted environment, a cure for mental illness?

But Dr. Karl said quietly, “I’d like to have Starlet back.”

There was a noticeable lessening of tension in the children.  Dr. Karl had found the right way.