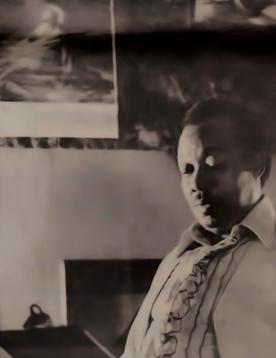 Topekan acting on desire to learn to read

Robert W. Lowery is a survivor.

It takes a special kind of courage to do what the 53-year-old Topeka grandfather is doing.  He is learning to read.

All his life he has memorized and copied so carefully that many people didn’t know he couldn’t read.  He has a driver’s license (obtained after an oral test); he has driven cars, trucks and an ambulance.

“I’ve always been able to travel,” he said, “because of my memory of places, trees and fences. If I see something, I remember it.”

Because he fears the consequences of mistakes, he has paid other people to fill out forms for him.  He cannot fill out a check, but he pays someone else to do it for him and then he can sign it.  He writes a lot of letters—and the way he does it is to copy two or three passages from the Bible, put them together, and sign his name.

Lowery’s interest in religion has brought him an intense desire to learn to read the Bible that he has copied so industriously all these years.

He is one of thousands of people in the United States who have “fallen through the cracks,” even though the law says that all children must attend school until they are 16 years of age.  Presumably they come out able to read.  But many do not or have low proficiency.

In Lowery’s case, his near-illiteracy came about when he lived as a boy with his grandparents on a farm in Kentucky.

“I had to work all the time,” he said.  “I missed a lot of school. I went to school for seven years but only went to the third grade.  The teachers were good, and they wouldn’t just pass you.”

This is not always true in all communities, Shirley Inman and Ann Brazda, Kansas Department of Social and Rehabilitation Services reading teachers, said.

Some students are passed without reading skills, then passed again by the teacher in the next grade, and so on until they leave the educational system—unable to read.

Others have learning disabilities that either are not detected or are not dealt with successfully.

Many move from one community to another so often that they seldom complete a school year, and usually when they go to a new school, they are set back a grade or two.  When they feel totally lost in the system, they drop out.  Others have never gone to school in their lives.

Some have physical or emotional illnesses so severe that their learning capabilities are stunted.  Some never catch up enough to learn to read with proficiency.

There are resources for those people in Topeka, such as the Topeka Literacy Council, an English reading course at International House on the Washburn University campus, a reading course for adults at Topeka High School, and private tutors.

Lowery says it’s difficult to get a job—almost any job—unless you can read.  He also feels it’s important to set an example for his children and grandchildren, so they will get an education and not drop out of school.

So when he became unemployed and went to Social and Rehabilitation Services for help, personnel discussed with him the possibility of his being tutored to read in a fairly new program for their clients.

Lowery wanted it.  He began the program in August, tutored in a one-to-one classroom.  He has worked hard, with determination.

He is proud that his grandparents reared him to do things and work hard.

“I think the Lord for that,” he said.

He likes to cook and clean house.

“I can’t live with dirt,” he said, referring to his immaculate room.

He says he can add like an adding machine, but has never put any of his math down on paper.

Lowery said of his gradually developing reading skills, “It makes me feel real good.  I’ve always been a careful-type person.  I read real slow.  The reading and writing isn’t like a person talks, I found out.  I talk slow.  So, the teachers are teaching me to be faster in reading.  All the teachers have been nice and seem to enjoy helping somebody who is helping himself.

“I enjoy the program.  I’m finding words I never heard before.  I can really read lots more than I used to, and I don’t have to copy.”

His biggest battle, he says, is to learn to read the Bible.

“King James is not really for uneducated people,” he said.

He has discovered there are people in the community who can’t read as well as he can, and he tries to help them.

I tell them they’ll be nervous coming, but after they get here and people treat them nice, then they won’t be nervous.  Come, I tell them, and then you will feel good.”

The teachers, he said, teach slowly.  They don’t make fun.  And that helps the new readers get better.

There are 11 SRS clients now learning to read in the SRS program.

Inman and Brazda said that at first SRS referred clients to the Topeka Literacy Council for tutoring.  But there were so many.  And now the teachers go through training workshops sponsored by the literacy council to prepare them for teaching clients themselves.

They tutor each student once a week.  They do not take students beyond the fourth-grade reading level.

The Lauback Way to Reading, a special method for adults created by D. Frank C. Laubach, is quick and geared for success. There will be obstacles for some slow learners of those will learning disabilities.

So at the end of the very first lesson the new readers go home able to read a few sentences.  And in the glow of that small success, they’re on their way.