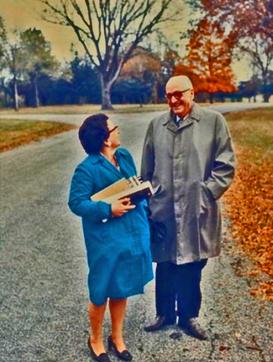 HOW TO KILL A CAT
by Stannie Anderson
1990

My friend, Dr. Karl Menninger, and I were having a peculiar conversation a few years ago about the best way to kill a cat.

In our 30-year friendship, we had many unusual conversations, but this one sticks vividly in my memory. Perhaps it was unusual because both of us were animal lovers—I loved cats and Dr. Karl was fond of his poodle dogs.

The topic came up while we were talking about Dr. Albert Schweitzer, a man both of us admired.

I think there is an inconsistency about Schweitzer’s reverence for life philosophy,” I told Dr. Karl.

I had talked with a young doctor who had worked at Schweitzer’s African hospital. He said if a stray fly got into the hospital, Schweitzer would insist workers wait until it landed on a piece of cardboard, put a glass over it, and the carry it outside to release unharmed.
On the other hand, the hospital was overrun with stray cats, and no effort was made to spay or neuter kittens. He’d take them out of the basket, one by one, put them on his desk and smash their skulls with a wooden mallet.
That, to me, was inconsistent with a supposed reverence for life.

Dr. Karl didn’t see any virtue in consistency usually—and I knew it—but he always loved to play devil’s advocate.
“Tell me, Stannie,” he said, “if you were going to kill a cat humanely, how would you go about it?”

“I’d give it a lethal injection,” I said.

Dr. Karl considered that for a moment, then said, “When I was a young doctor in medical school, I did some experiments with animals. Cats are unpredictable. If I gave medicine to one cat, it would go to sleep, while another cat, given the same medicine, would go berserk and claw its way to the ceiling. So a lethal shot wouldn’t necessarily be humane for all cats.”

I mulled that over.

“You might drown it,” he continued clinically. “But that’s not always a pleasant way to die. Sometimes cats struggle a lot.”
We went through a whole list of things, including strangling, suffocating with a pillow, giving it a dose of gas, running over it with a car and throwing it off a building.

Eventually I came around to his way of thinking, that probably the most humane way to kill a kitten is to crush its skull with a wooden mallet.